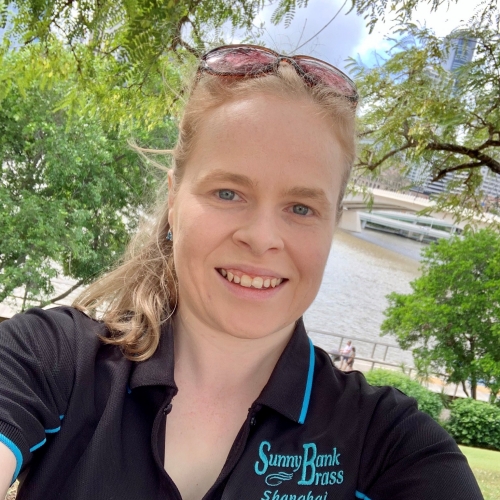 Emily learnt how to read music and play piano from her Grandmother (pianist) at a very early age (before her legs reached the pedals) , developing a lifelong joy and respect for music. In school, Emily learnt the recorder (including bass recorder) and was excited when she was selected to audition for the school instrumental ‘Concert Band’ music program. After trialling every instrument from woodwind, brass, and percussion, she knew the trumpet was ‘the one.’ This was despite her family initially having reservations about a trumpet player in the house!

In 2004, Emily was encouraged by both her grandmother and her school brass music teacher to join the local brass band, Sunnybank Brass, after the local paper featured an article about the band’s workshops for developing players. Starting in the junior band on trumpet, she soon moved up to Sunnybank Brass No.2 (C Grade/D Grade) on cornet and then onto flugelhorn shortly after in 2006. Remaining on flugelhorn until late 2015, Emily then moved up to Sunnybank Brass No.1, where she currently plays back row cornet.

Emily has attended many national, state and local contests, ANZAC Day services/parades and other community parades and workshops over the last 15+ years. In 2018, Emily travelled overseas with Sunnybank Brass for the 29th Shanghai Tourism Festival (STF) for which she was heavily involved organising behind-the-scenes, finding the overall experience rewarding and culturally enriching.

Passionate about Sunnybank Brass and the ‘banding community’, Emily has volunteered much of her time in the support and running of the band and its numerous events, was the No.2 music librarian for many years and has twice been voted as the band's Most Valued Member. Since 2013, she has been actively involved behind-the-scenes as a General Committee Member and Media Officer (Social Media/Website). In 2015, Emily received her Sunnybank Brass Long Service Medal for her continuous service to the band.

In 2019, Emily accepted the position as the QBA Secretary and is eager to positively contribute to the support and running of the fantastic banding community in Queensland. Emily looks forward to hearing from you all, and eagerly hopes that over time she will get to know and meet many of you, whether it be through the various contests, QBA events, Youth Band, workshops or other banding occasions.

Put simply: Emily is a self-confessed ‘band tragic’ library technician addicted to banding, books and information. She is a hard worker who likes to work quietly and efficiently in the background, getting things done.